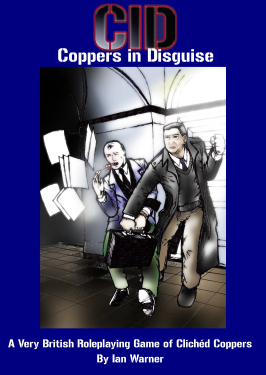 CID: Coppers In Disguise is the first of the Random Insane Side Project games that aim to take Tabletop Roleplaying to very odd (if not unique) places. With the basic mechanics of the History Farce system powering them they shall endeavour to emulate some rather strange genres.

My British fans will be very aware that the majority of our Television Dramas are based around Police Detectives. The format is cheap and can be relied on to succeed even if the show is so full of clichés that nobody takes it seriously. CID: Coppers In Disguise casts your Gaming Group as a bunch of maladjusted plain clothes Coppers working out how to solve the case whilst keeping their noses clean and hoping against hope that what little personal life they have doesn’t come crashing down around them.

American fans of course have the novelty of playing a Police Officer who isn’t a trigger happy knuckle dragger weighed down by unnecessary heavy weaponry. Hell most characters don’t even have guns: Imagine that!