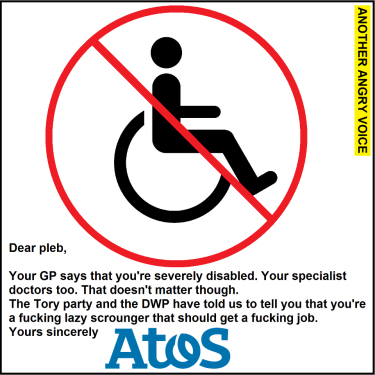 I like many of my disabled comrades reacted to your change of heart on disability benefit with a cautious optimism. The thought of a mainstream party getting off its collective backside and actually doing something for the disabled people being quietly murdered by a system actively hostile to them is quite appealing but you will understand I’m not entirely convinced of your sincerity until I see some concrete action.

First and foremost DPAC, the Black Triangle and many others have gathered enough evidence for criminal convictions of Iain Duncan Smith, Maria Miller, Chris Grayling and the management of ATOS “Healthcare”. If the shocking hard proof they have gathered with only Freedom of Information Requests and the odd whistle-blower isn’t damning enough imagine what a bunch of real Coppers with Search Warrants would find?

Naturally with the legal system as it is we’ll probably only find something minor like defrauding the public purse but hey they nailed Al Capone for not paying his taxes!

As the disabled have been kicked backwards and forwards between the parties over the past 15 years a criminal investigation and convictions would finally draw a line in the sand that the weakest amongst us are not to be interfered with.

The problem however doesn’t stop there: We need a radical reform of disability benefit to make it easier to claim for the genuine. Your suggestion of combining the DWP and NHS was good but I’d go one step further. I would remove disability benefit from DWP’s clutches altogether.

Let me explain… the DWP are, by unfortunate necessity, callous and cynical pen pushers with very little care for their fellow citizen. However much you may try to train up specialist disability advisers (like the one who suggested I close my claim because the mandatory course she would have to send me on was “basic job seeking for retards”) and encourage a positive atmosphere you will never get that in a Job Centre.

Disability Benefit may, technically, be a pension but it is one that needs extensive medical understanding and compassion. Moving the benefit entirely over to the NHS and having it prescribed like medicine by ACTUAL DOCTORS would not only create a compassionate easy to use system but cut billions off the DWP budget and create a system with next to no chance of fraud.

I hope you find this letter interesting and I encourage you to explore these possibilities further. I have had extensive correspondence with my local MP David Burrowes (aka the British Rick Santorum) which you can find, along with many other bits of campaigning under the activism tag on my blog.

Member of
DPAC,
The Black Triangle Campaign
The Official Monster Raving Loony Party
The Justice Union of the UK (As Mr Fowl)

Founder of
The People’s Court of Government Corruption

3 thoughts on “[Activism] An Email to Liam Byrne”