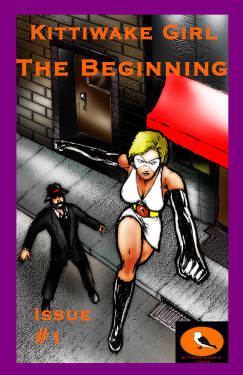 I had a bit of time so I thought I’d give you lovely fans an update on where I am going with my comics.

Kittiwake Girl: The Beginning: An alien child of incredible power is raised by a humble English Village before hitting the perilous big city as the world’s first Superlady.

Magnificent Magda: Genesis: An exhibit of a Nevada Freakshow finds out that she is in fact a half angel and is taught by a mysterious mentor how to balance the hidden world with the real one.

The Widow’s Vengeance: Widowed at the very moment she hears “I do” Kitty McAvoy sets off on a terrible vengeance spree that even the emerging community of Superheroines seem powerless to stop.

If these are a success I plan to go on to the War years with a crossover series entitled Peace in our Time as well as telling the story of the rise of the villainous Major Britannia.
Stay tuned for updates on Kittiwake Girl: The Beginning #1 and the Tabletop Wargame Whore’s Blade Heroics.