In order to give us some prettier pictures of painted minis I have taken up the offer of a professional to have some Kittiwake Classics Miniatures painted. 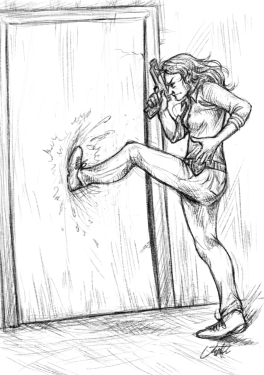 The Basic Mechanics of CID: Coppers In Disguise are little changed from the History Farce games that preceded them.

Well that’s not quite true: CID introduces a new concept to the very simple 1d6 roll off system that was devised way back in the Winter of 2011 and became a key part of the Whore’s Blade Wargames System.

CID is the first game where spending one of the two Virtues or Resource points allows you to re-roll dice rolls involving an associated statistic.

Ego: Represents a Copper’s determination to get shit done regardless of the outcome. It is tied to the Bad Cop Statistics of Instinct, Sleaze and Violence.

Discipline: Represents a Copper’s discretion and ability to keep a clear head and stick to the rules. It is tied to the Good Cop Statistics of Brains, Humanity and Grit.

Clichés can refuel these Virtues as can the Super as a reward for good play. Save up enough Virtues and you can attempt to learn new tricks and get new gear as described in Experience and Equipment. 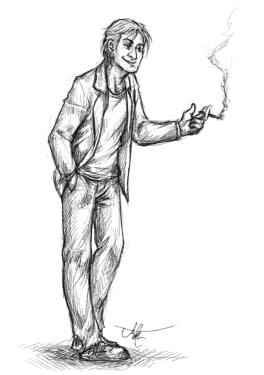 Clichés have their own Chapter: Why? Because they are what gives Coppers distinct thematic advantages and disadvantages. Furthermore when they come into play these Clichés refuel the Copper’s Virtues.

Virtues can be spent on Re-rolls and invested in Advancements to the Character and Equipment. This allows Players to have a bit of fun with the whims of fate in a manner that suits the over dramatic action of the genre.

With the History Farce system at it’s core CID: Coppers In Disguise has a relatively straight-forward Character Creation system for both new players and those who’ve dabbled in the mess of Georgian England.

Having said this the very team orientated nature of the setting has forced a more Co-Operative Character Creation Process in which Players are required to work together to establish their place in the Team. It is very likely that some Coppers will begin play at a more effective ability level than others but this is balanced out by extra Flex and the Drawbacks of more Clichés.

Clichés are kind of like ready made Merit-Flaw (or Strength-Weakness) packages that also contribute Virtue points when they help or hinder.

In addition the system has been further enhanced with the division of Statistics into Good Cop and Bad Cop with mechanical bonuses available to those who emphasise one over the other with a direct impact on the spendable Virtue Points that provide a heroic edge for Player Characters.

This is something of an errata as I don’t think I explained the Alien Weakness clearly enough.

When an enemy Exploits the Alien Weakness by sacrificing her Weapon Attributes (see Chapter Nine: Weapons) and successfully inflicts damage she inflicts 2 boxes of the appropriate Damage rather than the usual 1. If the Alien succeeds in her Damage Resistance Test she still suffers 1 box of the appropriate damage from a glancing blow.

The reason this is somewhat slapdash in the book is because the Alien Weakness went through the most revisions of all of them. An optional alternative Weakness is presented below.

Click the picture to go to the Table Warfare store.

For inside info on the development of the madness…

As part of a reorganisation of my web presence I have deleted the old Random Insane Side Projects blog.

As I get to work on these projects, beginning with CID: Coppers In Disguise, previews will appear on the company blog here.