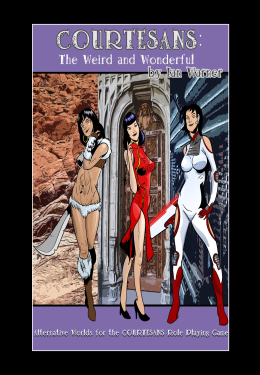 And that my dears concludes my epic month of reprints. Click the link to purchase.

I will do a Friendly Chat About Video when I have some camera time that will explain how I approached these new editions and how my views have evolved over the year.

Coming next The History Farce Guide to Georgian Slang.

Features and Bugs are minor special rules that allow further customisation of Warriors to make them individuals rather than random grunts.

They cover many areas of the rules changing how Warriors move and fight as well opening up new creative tactical options.

For those of you coming over from the Roleplaying game these abilities are not as powerful as Path Features but they are infinitely more customisable and characterful.

Each Feature costs 10 points to purchase and each Bug refunds 10.

Warriors have 3 slots of each. 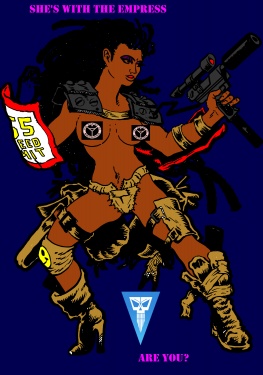 Unlike many ridiculous Science Fiction Wargames, Whores Blade 20,000 reflects the fact that in the future warfare will be dominated by fire fights.

You can TRY to be an elite mystic space knight but normally that gets you shot to pieces!

Weapons listed (with the exception of those gained by Features) are therefore all shooting Weapons.

As in Courtesans 20,000 they are divided into Standard Issue, Elite and Heavy Categories with prices and restrictions limiting the number of Heavy Weapons in Warbands.

Weapon Attributes are little changed aside from being rationalised into a notational form suitable for a Roster Sheet and Poison is now referred to as Critical as not all weapons capable of such horrific damage are necessarily venoms.

Ranges are deliberately on the short side to keep games mobile and fast paced.

Engagement is all about the core of Wargaming: Killing shit!

Engagement begins with the Players taking it in turns to have Warriors declare their Targets.

These Engagements are resolved with Attack Challenges which are typically Aggression versus Aggression unless it is a base to base Melee Engagement in which case it is Grit versus Grit.
The Winner of the Challenge can use her Margin of Success to attempt to Inflict Injury or Close the distance to her Enemy.

Injury uses the tried and tested system from Doxy and Weird and Wonderful.

Cover is a simple bonus to Injury Resistance and Hidden Warriors have the option of making a Pop Up Attack for a bonus to the Attack Challenge.

Falling is treated as an Attack with a Margin of Success equal to the number of Floors fallen.

Darren has just sent me this picture of the Sister Sadie Sculpt.

Can’t wait for the others 🙂

In Courtesans 20,000 I answered the basic questions about the Setting of the Empire of Woman. It was however quite brief and for good reason.

I had a lot of new rules to cram in and the third, and probably most popular, Alternate Setting was also something of an afterthought.

In the Whores Blade 20,000 Rulebook I go into further detail about the Empire. Not just from the context of the Quizzers either.

The Core Rules shall focus on humans the most populous sentient species.

There shall be a future supplement about Aliens but there is enough variety to fill up a Wargame in just human politics both between the Empires various power blocs and the various Dissident factions.

So there you have it, the Wargame gives you more detail than the Roleplaying Game funny that!